A NEW VIEW OF THE CITY 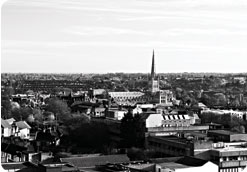 One of Norwich's iconic office buildings is being brought back to life, giving a boost to the city's commercial property market and two of the city's firms.

Norfolk Tower, in Surrey Street, had been one of Aviva's premises, also housing parts of RAC and BBC Radio Norfolk.

The firm behind the building's refurbishment has also moved in.

Commercial property investment company Mahb Capital was founded by local businessmen Matt Bartram, John Maynard and Antony Hunt in March this year ?and bought the building the next month.

Mr Bartram said: "Norfolk Tower is such an important landmark in Norwich that we wanted to make the most of the space and position it offers us. That is why we are tailoring each individual floor to the needs and specifications of the tenants, and we are delighted that two key local businesses have already chosen to base themselves here."

ULR was founded in 1988 and has been based in Whiffler Road. Norfolk Tower will be its second office.

Managing director Robert Kay said: "The move to Norfolk Tower was imperative to us with our continued growth."

It also gives the firm "the safety, security and peace of mind of a second office for disaster recovery purposes" and raises the profile of the firm.

Balloon Dog, once fully moved into Norfolk Tower in January, will close its Georges Street offices - its home for the past 30 years.

The firm, formed out of Fox Murphy two years ago, also has offices in London.

James Clifton, chief executive, said: "Despite the difficult economic climate, we have seen some growth and this move sets us up for the next phase of the agency's development. The open plan layout is really appealing to us, as it will enable people from different disciplines in the business to work closer together on projects. It's also ideally suited for some of our key clients, such as Aviva and RAC."

Balloon Dog also works for such names as Adnams, Pret A Manger, Barclays, Duracell and Disney on Ice.

William Jones, of Bidwells' Norwich office, said it was good news for the city that one of Aviva's former offices had been let but that there was still a large amount of empty office space out there - largely because of poor quality.

"The property market is still struggling a bit," he said. "Most of the demand is from small and medium size businesses. The floors in Norfolk Tower are what people are looking for."